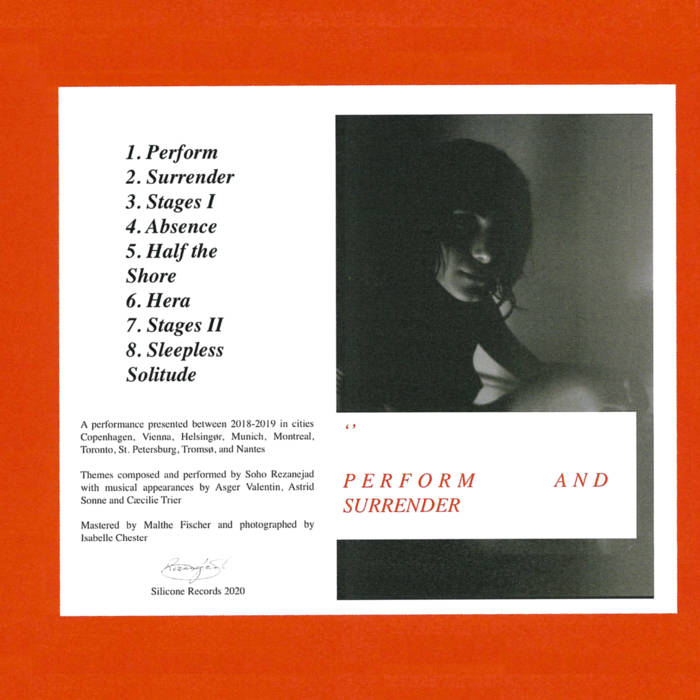 Soho Rezanejad's final album of 2020, Perform and Surrender, results from a series of performances presented between 2018 and 2019 in Copenhagen, Vienna, Helsingør, Munich, Montreal, Toronto, St. Petersburg, Tromsø and Nantes. The series of presentations later adapted to a full-length album backed by poem recitations. Here, Rezanejad's aim is the distillation of each city, jacketed in its spectators' appetites.

“On the day of performance, I wrote small scores, bits of stage direction, or half-lit phantoms to activate the set. The performances became special to each space, each contributing a fragment to the record’s whole.” Expanding more on the new record, Rezanejad said "I lost someone very dear to me at the time. All things, especially in the practice of surrendering, resembled a testimony of life and death. The language of nature, especially in its falls and springs, played a substantial role in the album's title and direction."

The album was mastered by Malthe Fischer.
Artwork photographed by Isabelle Chester.

Soho Rezanejad (b. 1989, New York City) is an independent artist, composer, and playwright. She works and lives in Copenhagen.